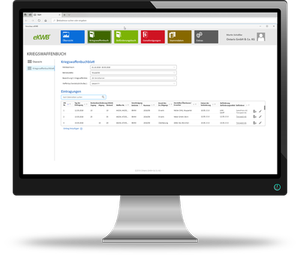 The easy-to-use electronic War Weapons Book (eKWB) from Ontaris helps companies with their legal documentation obligation, makes it simple, prevents incorrect entries and also provides an interface to BAFA for the semi-annual report. As a central component, the electronic war weapons register also contains, among other things, a licence administration and the administration of the documents justifying the entry.

The War Weapons Control Act serves to secure peace and prevent war. It is intended to protect the peaceful coexistence of peoples and to ward off threats to international peace and security. In order to grant this, Article 26(2) states 2 of the Basic Law stipulates that weapons intended for warfare may only be manufactured, marketed, transported and stored with the approval of the Federal Government.

In the course of the digitalisation of official processes, all companies subject to reporting under the War Weapons Control Act are obliged to report the half-yearly inventory report and changes to the BAFA in electronic form from October 2020.

The
eKWB Small
is the perfect solution for companies that purchase or transfer weapons that fall under the War Weapons Control Act. Typically, these are transport companies that temporarily store or secure goods. In addition, the software offers the possibility of an extensive approval management.

With the version
eKWB Enterprise
you can post all transaction types that are specified by BAFA. Accordingly, the solution is aimed at companies that store, produce or dismantle war weapons at one or more production sites. In addition, a storage location management rounds off the software.

You would like to receive more information on the topic Electronic War Weapons Book from Ontaris or arrange a presentation appointment? Do you have questions about the technical requirements or the process of how the software can be integrated into your company infrastructure? Call me at the following number on weekdays between 08:00 and 17:00:

You can also send us your request via our contact form. We will get back to you immediately: